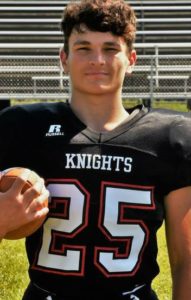 Connor Williams, 15, along with his friend David Waag, 17, were both welcomed home by The Lord in August of 2017. They were both Clark County high school athletes in Springfield, Ohio and full of life and happiness! Both were riding in the backseat, when the car they were in drifted off the right side of the road, over corrected and ran off the left side of the road, hitting two trees. Like so many of us, they were not wearing their seat belts in the backseat. The two in the front seat were wearing their seat belts and survived. Connor was always all about football. He definitely wanted to play at the next level after graduating! His mom, Devin, said, “He was creative and outgoing. He loved drawing and to this day we are still finding random sketches from him throughout the house.” Connor enjoyed being outside and around nature, and he especially loved animals. He was a very active kinesthetic learner, so a typical lecture based high school course was not his style. When he got accepted into Global Impact STEM Academy for high school, he thrived. The hands on learning combined with his raw artistic ability and creativity led him to the dream of being an engineer. With him being only a sophomore when he died, his post graduation plans stopped there. At the time he was more concerned with football games and friends!